Over the past few decades, local and international voluntary monitoring groups and community detectives have been involved in a variety of programs ranging from natural management (e.g. Landcare and Reefwatch) to various Biosecurity initiatives (e.g. Weed spotters, Weed Warriors, Waterwatch, AQIS campaign Top Watch in the Northern Territory, Big Bugs). These programs rely on voluntary surveillance from groups with varied levels of experience and expertise, and with a shared interest in protecting the environment and natural resources from exotic and invasive pests (plants, animals and diseases).

BeeForce is a community engagement project that examined the potential of urban hobby beekeepers in a post-border surveillance program for the early detection of Varroa mites around high-risk entry points in two locations in Victoria. BeeForce identified how community detective networks, or BeeForce task groups, could be recruited, structured, trained and motivated to assist in monitoring for a high priority honey bee pest over a two-year initiative in both Melbourne and Geelong. This project compared two models which arose in Melbourne and Geelong and the BeeForce participants’ drivers and inspirations in both locations. 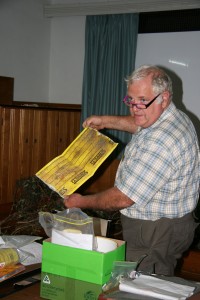 As the number of pests challenging the Australian production systems and environment is increasing, the involvement of a cheap but reliable task force is an invaluable addition to the State and National programs already in place around the country. Not only professionals and hobbyists alike are at risk of losing their honeybees, but pollination could be greatly impacted if the Varroa mite establishes in Australia. A set of dependable BeeForce participants trained to perform a very simple set of tasks for the early detection of Varroa mites can enhance the current capability dedicated to post-border programs.

The BeeForce pilot demonstrated that participants could be successfully enlisted, trained and relied upon. After the 2 years pilot phase, BeeForce was implemented at the national level.

It is now recognised by several environmental groups and government agencies that volunteers can assist with detection and or control of the growing number of pest threats facing Australia and value add to the set of programs already in place across the country. Such a task force has the potential to bridge the divide between government, industry and the community sectors. Most importantly, programs such as BeeForce increase community awareness, improve Australia’s preparedness for new pest incursions and invasions, speed up responses and mobilise community vigilance in early detection for a more effective pest detection and control.