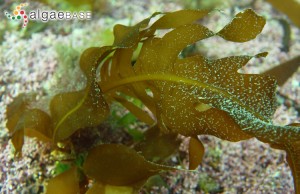 Invasive marine plants are often overlooked in comparison to marine animals. Like their land counterparts, the introduction and spread of invasive marine species can have devastating consequences.  Yet many species have been introduced either deliberately for aquaculture, or accidentally through ballast water, on ship hulls or by hitchhiking on other marine species. Around the world, invasive marine species belong to all major macro algal groups.

Undaria pinnatifida for instance, is a commercially cultivated warm temperate kelp from Japan, China and Korea. It may have been introduced with pacific oyster spat in many regions including New Zealand, Australia,  Argentina, East and West US coasts, as well as the Atlantic and Mediterranean European coastal areas. The large sporophyte grows rapidly and is used for many food and biomedical products. The microscopic gametophyte phase reproduces rapidly and it readily survives in niches. It may reduce local biodiversity because of extensive canopy formation (e.g. NZ).

Sargassum muticum, a fucoid brown, introduced from Japan to BC Canada in late 1940s with Pacific Oyster spat, has migrated to Pacific Mexico. It was also introduced on spat to Europe (Great Britain, Ireland, France, Scandinavia, Baltic Sea, Germany, Netherlands, Spain, Portugal, Italy, Adriatic) and the Philippines. Sargassum muticum’s range is now stretching from Campbell river, British Columbia to Baja in California. In Europe it now extends along the coasts of Great Britain, France, Scandinavia, the Baltic Sea, Helgoland, the Netherlands, Ireland, the Iberian Peninsula and it is found in the Mediterranean from Italy and the Adriatic. It is recorded from Japan, China, Philippines and Alaska. In some areas it becomes a nuisance forming large detached mats, clogging marinas, recreational areas and other sports facilities. This species grows and reproduces fast with an ability also to spread by vegetative fragmentation. It has much less commercial value than Undaria.

Two green algae (Caulerpa taxifolia & C. racemosa), probably escapees from a commercial aquarium, are a major invasive problem especially in the Mediterranean, France and Italy as well as Southern California, USA. These have anti-herbivory properties and their fast growth may out-compete natives in some areas. However, opinions differ.

There are also numerous marine micro algae such as diatoms, dinos and coccolithophores that are presumed to be invasive and some are toxic.